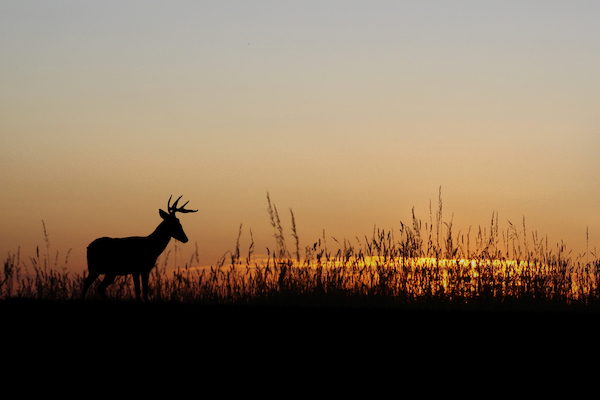 This article was written for DeerHuntingGuide.net and first appeared here.

Are deer nocturnal? We get this question a lot from hunters and non hunters alike.

The answer is no, deer are not nocturnal. At least not most of the time.

There are some times of the year when some of the deer may become nocturnal animals for short periods of time due to environmental conditions that force them to only be active during nighttime hours.

When Deer are Most Active

This means that deer are crepuscular animals, which according to Merriam Webster Dictionary means, when relating to animals, active during twilight hours.

But that doesn’t tell the whole story.

Are deer crepuscular all the time?

There are times when deer tend to be very active during the daylight hours, sometimes even in the middle of the day, so we could say that deer are diurnal animals during certain times.

Diurnal means active during the day. Humans are considered diurnal.

Let’s take a look at what makes deer diurnal or active during the day.

Factors That Make Deer Active During The Day

There are many factors that make deer more active during the day, let’s break down a few of the top causes of diurnal activity.

You can see the doe in heat in the background. This mature buck would not let her get out of sight and followed her everywhere.

The period of the year when the female deer (does) come into heat and are bred by the bucks is called the rut and it is one of the top causes of more diurnal activity.

Unlike the summer months, when the deer movement and activity are very predictable, the rut ushers in a period of unpredictability and chaos in the deer’s world.

During this time, the bucks are like testosterone filled teenagers and will be on their feet all day in search of a doe in heat. The movement by bucks will also keep the deer moving and the does on their feet as they constantly flee the harassment of the bucks. It is very common to see deer at any time of day when the rut is taking place.

This is the period when most mature bucks are killed by hunters and many deer are killed by vehicular collisions due to the fact that a great deal of deer are covering so much ground and in a haphazard manner.

The second most common factor that make deer active during the day is weather conditions.

When they sense this, the deer eat because they know that the weather may prevent them from feeding for a period of time. If this coincides with the daytime hours, they are going to feed anyway.

The other weather condition that will have deer actively feeding at any time of day is a prolonged period of cold weather.

This usually occurs in winter, during the colder months when the food sources are less plentiful and the deer really need the nutrition to recover from the rigors of the rut.

When this happens, you will see deer actually running into the field in broad daylight and in large numbers to be sure that they get the nutrition that they need to stay warm and survive.

Once their bellies are full, the deer will find their way to the south facing slopes and bed down in the direct sunlight to stay warm, avoid predators and chew their cud.

As mentioned in the beginning of this article, there are times when nocturnal activity increases for some deer. Let’s take a look at what can make deer nocturnal.

If you have ever spent any time around any white tailed deer hunters, you have surely heard them talk about a buck that has “gone nocturnal”, but what does that mean?

These hunters think that the deer are nocturnal because they don’t see deer during the day.

Let’s take a look at the study below to determine if deer are nocturnal .

According to a study at Penn State University, in which they radio collared white tailed deer, the number one cause of deer becoming nocturnal was hunting pressure.

The more hunters that were in the woods for long periods of time was directly correlated with less or even no daytime activity for some deer.

Deer are cautious animals and respond quickly to human behavior and unpleasant circumstances that could cause them harm, thereby increasing their nocturnal activity.

This nocturnal animal behavior was only temporary and the deer would resume their normal behavior and crepuscular activity patterns once the pressure from hunters lessened or hunting season ended.

It is important to note that the white tailed deer in the study did not stop moving completely during the day. Their daytime movement was drastically reduced and they only moved short distances for shorter periods of time in their preferred spots where the felt safe.

We can deduce from this data that the deer were in fact on their feet during the day, however, they would not leave the safety of the thickest and most overlooked areas in their home range until after dark or during low light conditions.

One thing that can make most deer nocturnal for a short period of time is heavy rain. Deer will usually remain bedded during prolonged periods of heavy rain. If that rain occurs between dawn and dusk, the deer will remain bedded and only be active at night.

While most deer may bed down during periods of rain, there are times when other deer will be active when it is raining. Click here for answers to the question: Do deer move in the rain?

Other factors that lead to more nighttime activity for most deer are temperature and time of year.

During the warmer months, the daytime temperature may become uncomfortable for the deer and they will typically increase their nocturnal activity to take advantage of the cooler nighttime temperatures.

What Do Deer Do At Night?

The 24 hours in a deer’s life is a cyclical, habitual process just like every other animal or human and their nighttime activity is very similar from day to day.

A deer has 2 main feeding times in a 24 hour period, Dawn and Dusk, the twilight hours. Once the deer is full, it will make its way back to a bedding area where it feels safe from prey animals and it will bed down, usually near other deer and chew its cud.

Also during this time, the deer sleep for short periods, but mostly it is just resting and has to stay somewhat alert so that it can detect any prey animals that could be looking for a meal.

If a deer is mainly feeding during the morning hours and evening hours, that means that deer sleep or rest and chew its cud at night and during the middle of the day.

Obviously this pattern changes based on the factors discussed earlier in this article and there are times when most deer may be active all night and spend much more time resting during the day.

Tips For Hunting Deer That Are Nocturnal

The deer in the trail cam picture above was considered nocturnal because he never ventured out of this quality cover during the daylight hours and it was nearly impossible for a human being to get in there because it was so thick.

First we have to realize that just because you are not seeing a certain mature buck during daylight hours, it doesn’t mean he is truly nocturnal. It just means that he is not moving from where he feels safe until after dark, but I guarantee you he is on his feet and moving around inside where he feels safe and can avoid hunters.

The key to successfully hunting a buck like that is to stealthily make your way closer and closer to where he is hiding.

Most hunters will never kill a “nocturnal” mature buck, but other hunters are consistently successful.

Let’s take a look at how you can get close to a “nocturnal” buck during hunting season.

The good news is that no deer is truly nocturnal. If they are left alone and not pressured, the vast majority of deer will soon return to their old predictable routines, being active during crepuscular hours and you can hunt them during the best deer hunting times.

Are Deer Nocturnal Or Not?

As you have read in the article above, deer are nocturnal only for short periods of time. They are mostly crepuscular animals and most active during twilight hours, but that can change based on a number of factors.

When deer are heavily pressured by human intervention into their habitat, they will become nocturnal for a period of time, until the pressure is reduced. At which time they will return to their previous routine during crepuscular hours.

There are many types of deer and they are all very adaptable and amazing creatures that will change their behavior in response to conditions in order to survive and thrive on their home range.